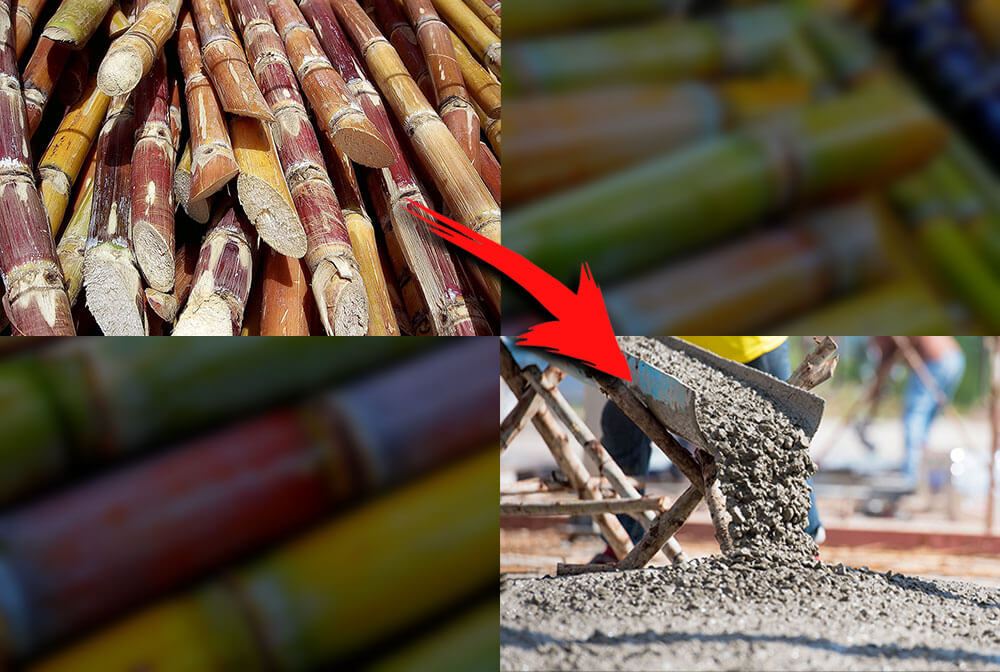 Among many environmental benefits, turning sugarcane waste into cement is also economically beneficial. Sugarcane bagasse ash has pozzolanic properties, which makes it a suitable substitute for cement. These ash particles can be recycled to make construction materials with improved quality and at lower costs. Further, bagasse ash can also be used for making concrete for the construction of roads and bridges. These benefits of using sugarcane bagasse ash in construction materials are evident in their environmental, economic, and ecological benefits.

Bagasse is the fibrous waste product of the sugarcane production process. It is collected during the cleaning process of the boiler and contains about 50% of cellulose, hemicellulose, and lignin. A ton of sugarcane yields about 26% bagasse and 0.62% residual ash. After combustion, the ash contains silicon dioxide and is used for fertilizer. Bagasse ash is also recycled in a process of grinding.

The chemically combined water (AQC) and portlandite content in cement paste are correlated with each other. The AQC content in sugarcane bagasse ash series was found to be higher than portlandite and exhibited higher C-S-H content, which is related to portlandite consumption in cement paste. The results of the study will be analysed and formulated into several relationships. The study is ongoing.

Agricultural and industrial development creates a lot of waste. Typically, most of this waste is disposed of in landfills. Not only does this waste increase the size of landfills, but it also pollutes the environment. Cementitious materials made from agricultural residues have a number of benefits for human health and the environment. The in-line sugar industry wastes such as bagasse ash are also used as biomass fuel.

The bagasse ash from sugarcane farms is a byproduct that can be used as a raw material for cement. It can be a partial cement, with normal consistency, hydration time, compressive strength, and water penetration depth. The ash is suitable for construction applications because it is free from harmful substances. It is a renewable source of energy. Further, the ash can be used as an alternative raw material for cement.

The ash from the bagasse of sugarcane crops is rich in lignin, which is found in groundnut shells, peanut shells, and wheat straw. It has low pozzolanic reactivity and thus can be valorised. As a biofuel, sugarcane bagasse has many advantages. It produces less smoke and is a better option than fossil fuels. It also reduces ash, which is harmful to the environment.

In the United States, there are 75 facilities for the recovery of energy from municipal solid waste. Most of them are located in the Northeast, though Palm Beach County, Florida, opened a new MSW combustion facility in 2015. According to the United States’ Advancing Sustainable Materials Management: Facts and Figures Report 2018, over 34 million tons of MSW were combusted in 2017.

As landfill space continues to shrink, the demand for compost has skyrocketed. As landfill openings become fewer, composting is becoming an increasingly viable value-added and financial option. In fact, many states have laws requiring businesses to compost organic waste and Oregon is developing a law to make composting a requirement for businesses. In addition to the environmental benefits of compost, composting also addresses agricultural, water quality, and financial concerns. The growing demand for high-quality compost is being driven by growing interest from homeowners, businesses, and public agencies alike.

In Europe, the key to reducing the amount of hazardous waste in the environment is to recycle it. The process of chemical recycling can be a lucrative alternative to landfill. In the past, it was only possible if waste products were disposed of in a specific way. Nevertheless, the EU has recently changed its regulations in this area. Now, companies such as Remondis are implementing a variety of technologies to create value from waste.

Unlike conventional recycling, chemical recycling processes are highly efficient. They transform polymeric wastes into raw materials or products. Raw materials are defined as those that are suitable for manufacturing products, excluding fuels and energy sources. Chemical recycling can contribute to the EU’s efforts in the area of environmental sustainability, as well as to the development of sustainable and renewable energy. The European Union has also backed initiatives to promote recycling and reduce greenhouse gas emissions.